Well, actually, we did.
Absolutely no parallels are being drawn between 410 CE and 2019.
In 410 we were dumped by the central European authority that had for the past 300-some years kindly accepted cartloads of our taxes and the finest of our fighting lads.

The people who didn't leave for the continent had little choice but to hunker down and make the best. Everyday luxuries like literacy, coinage and the rule of law evaporated. The guardians of communal knowledge became the singers and story-tellers, the bards, who insured themselves by weaving into the accounts careful flattery and strategic put-downs, depending on the company present. Like the stories they told, the identities of most of the bards have worn thin and been repeatedly patched up over time.

The picture of 'sub-Roman' Britain can be summed up as a society that reverted to its prehistoric roots. In mainland Britain 'prehistory' broadly ended with the arrival of Roman rule. It appears to have returned when Roman rule ended. The gloss of a Romanised way of life disappeared, leaving behind the homesteads, strongholds, clan systems and languages that had always existed quietly in the background.

There was one tiny difference though, in this picture of a society reverting to its prehistoric roots. One group of people retained a tradition of reading and writing, but curiously only did this in Latin. These were Christian communities, and they have left behind inscriptions made for graves.  Many of these are to be found across Wales. There are no contemporary written accounts from Britain on any other medium - these communities probably did also write on parchment, but the writings have not survived.

Legends and accounts of early history compilers like Brother Bede (the Venerable) also mention the arrival of new settlers from the mainland of Europe, initially as mercenaries paid to protect 'remainer' communities. From 1965 to 1978 the epic excavation at Mucking seems to show this process in action, with a very early Anglo-Saxon community living alongside a very late Roman style local community.

Y Gododdin and the reference to King Arthur

Current archaeology 2016 summary of the massive excavations at Mucking, Essex
During our field visit we saw the 'Staffordshire Pan', a find made in 2003 and currently on display at Tullie House Museum. Made around 250 CE, the pan's glorious swirling enamelwork shows shapes that would have been familiar 500 years before in the 'barbarian' northern world. The colours used are point to its having been made in the Roman period, and there's the additional clue that the names of Roman stations along the Wall are inscribed around the rim.  More about the dating and analysis of enamelwork from this excellent article: www.societies.ncl.ac.uk/pgfnewcastle/files/2015/05/McIntosh-A-study-into-Romano-British-enamelling.pdf 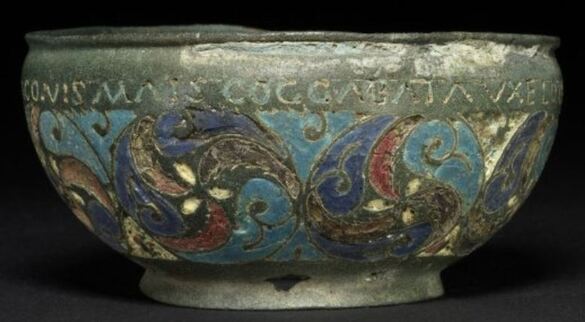 The Staffordshire pan, photograph from BBC website
Slides from session 1