Overcrowding in focus
Like all of the industrial towns dragged into the Manchester boom, Bury's population soared in the 19th century.
This completely wrong-footed the people who administered these towns, and Bury was no exception. Within half a lifetime Bury changed from a place that was quite easily and contentedly governed by a medieval arrangement of manorial court (the Court Leet) and general good ol' boys (the Parish Vestry Committee), to a heaving, overcrowded, insanitary mess.

A bit like the rapid changes seen in parts of Europe during 2015, when sleepy seaside resorts found themselves unexpectedly having to react to thousands of new arrivals, without local infrastructure, services, or cash to do much about it. So I'm asking history not to be overly harsh on either the existing junta, or the newcomers, both then and now.

Some figures to illustrate: the census figures from 1801 to 1891
It helps me to see figures visually, so here's that link as a chart: 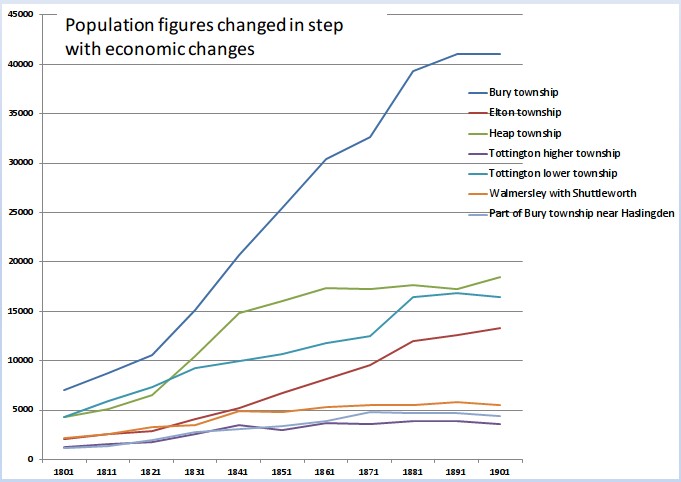 There appear to be noticeable sudden changes in population growth - the 1840's and 1860s especially. These also coincide with severe trade depressions, so maybe this shows both people migrating out, and fewer people being born, during these times of hardship.