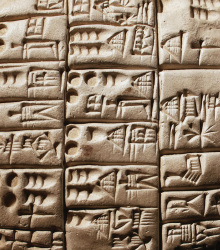 Cuneiform writing
Cylinder seals go with cuneiform (wedge-shaped) writing, the system that developed in ancient Iraq around 3500 BC. This system was based on making marks in lumps of wet clay with a reed. The clay was then left to dry.
As with most cultures in the past, relatively few people could read and write so scribes did this for them.
To 'sign' a document the person commissioning it from a scribe used their own seal. As most have a hole drilled through the core, like a cotton reel, it's thought they were worn on pendants, necklaces, or perhaps on belts like Japanese netsuke.
Some of the most elaborate ones have gold fittings and seem to have been fixed to bracelet-like handles.
They are made from many kinds of hard stones such as chalcedony, banded agate, and haematite, and it is quite clear that the stones were chosen for their beauty. For all we know, they were also credited with magical qualities. 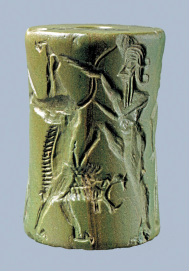 Cylinder Seal, circa 2350-2150 BC
These cylinder seals were made for about 3000 years, so there are a lot of them about, and by no means all of them have been translated or analysed.

Writing in cuneiform on clay faded out of use in the last 500 years or so before Christ, and without the clay, there's no call for a cylinder seal.

However these may be among the first 'antiques and collectables' in the world, as they are sometimes found in places where they'd been carried to, as souvenirs perhaps, by Greek or Roman travellers.