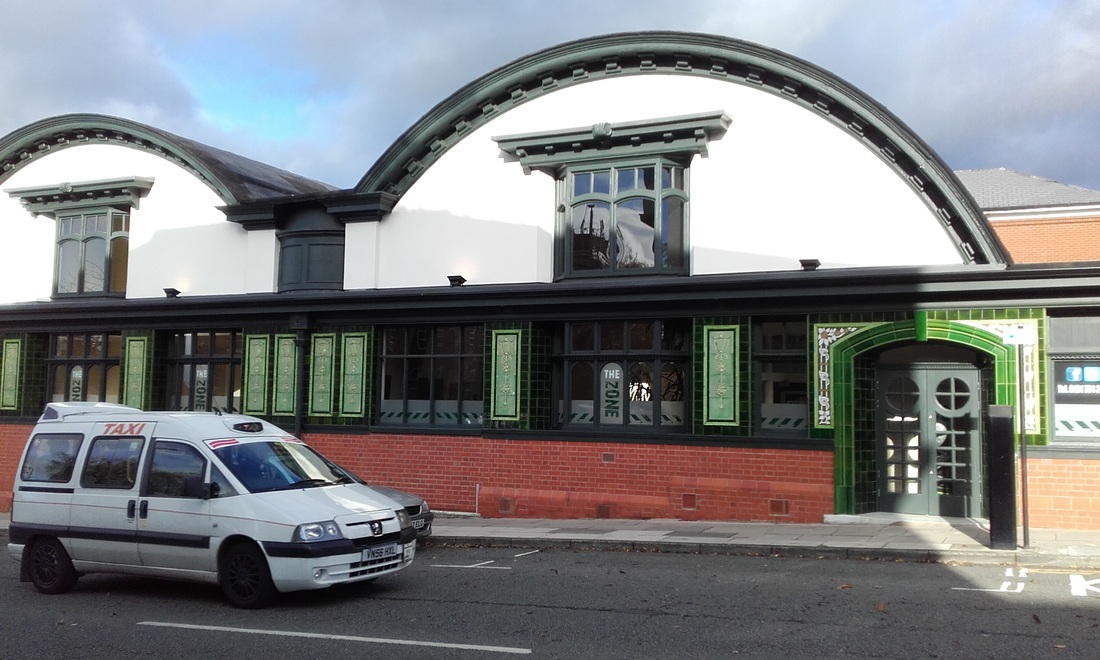 The Temperance Billiard Hall, Bolton Street, Bury, built in early 1900s
The contents of this section are, as ever, far from being the definitive, last word. But I hope this page will inspire folk to look further into the rich, largely unexploited resources of Bury's entertainment history.
Going down the pub...was a well-used local pastime if the numbers of pubs that appear on maps and in trade directories are anything to go by. We tend to forget, but for most of the 19th century and well into the 20th century, the pub provided a much warmer, brighter alternative to home. You met your friends, you got merry, there might even be a sing-song.
Over 100 Bury pubs had entertainment licences in the 1890s.....being of a suspicious frame of mind, that makes me think - well what about the licence dodgers then? In addition a brief glance at the map reveals scores of pubs with bowling greens attached.
Click here for more on pubs
Theatres and music halls
Sometimes these developed from pubs, and sometimes they were established separately. The research needs to be done in depth for Bury - down the road in Bolton extensive research has detailed the colourful history of the concert-rooms, varieties and music halls that thrived as the back lots of town centre pubs developed. More on theatres
The weekly market and seasonal fairs
....as with the rest of Britain, alongside the inns or pubs, markets and fairs were the hubs where news was exchanged, sweethearts met, bargains were struck and perhaps a bit of shopping happened too. Bury Market has moved location four times, starting out adjacent to the parish church. By the 19th century a new site for the retail market was complemented with an adjacent cattle market, abbatoirs and seasonal fairground
More on markets and fairs
Parks and pleasure gardens
Before the age of municipal parks, in Bury as in other growing towns, crafty 19th century entrepreneurs opened around the outskirts of the town ornamental gardens with pretty walkways, flower beds and shrubberies, and opportunities for refreshments. At peak holiday periods (presumably in warmer weather) bands were hired to provide dance music. At least one also had a 'museum'.
More on parks and pleasure gardens
The Public Baths
As with all 19th century public baths, Bury Baths were intended to complement attempts to improve the 'sanitary condition' of the town's population. Astoundingly, they were planned, built and opened between 1862 and 1864, against the backdrop of the severe deprivation caused by the Cotton Famine. A plunge pool, slipper baths (in other words, bath tubs for getting clean in) and Turkish steam baths co-existed in the building, sited at St Mary's Place off Silver Street / Manchester Road.
More on the baths