The Greek invention of Europe 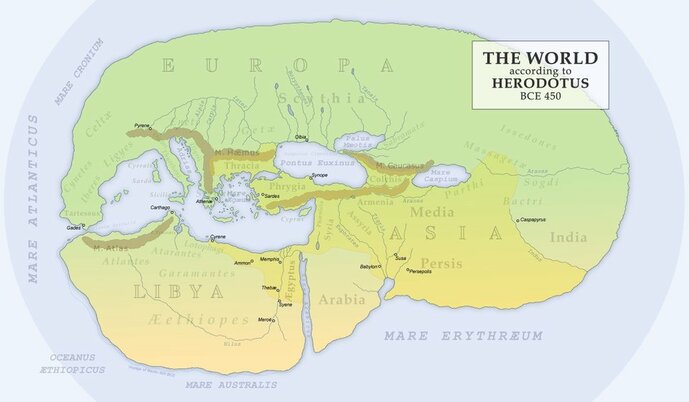 By the time of Herodotus, the 400s BCE, 'Europe' was a word known to the literate, educated Greek world. It referred to a vague area of land - the west was easy to define as it was the end of all the land in the world (that'll be us in Britain then).
The east and south were - well, debatable.
Cities known to the Greeks and mentioned by Herodotus have been marked on the map, including the enigmatic 'Pyrene' somewhere north of the Alps. This appears to be a Celtic citadel and extensive trading city at Heuneberg in Baden-Wuertemberg. More on Heuneberg here
Useful text for this section: Anthony Pagden, The Idea of Europe (dip in - it's a long read)
The Europa myth
Europa and the Bull was already an ancient myth by the time of Herodotus More about Europa and the Bull. There are many versions, which involve the Princess Europa being kidnapped either by, or for, Zeus disguised as a bull. And this was meant to be the origin of the name of Europe. I don't know about you, but to me it just doesn't hang right.
Europe as the Greek way of life
Both Herodotus and Strabo write about Europe as 'the perfect place', and by that they mean sort of the Greek-ruled territories around the Aegean. Here, the weather was neither too hot nor too cold.
In addition, the wild northern types who were undoubtedly very brave chappies and made fabulous mercenaries were known for being lawless, rash and intemperate.
The Asian or 'Persian' types (Herodotus interchanges these) were very clever but lazy and prone to corruption.
Whereas Greek men possessed the best of both characteristics, being brave and clever, but also law-abiding and resistant to corruption.
And cut a long story short, the gods must also agree because they kept helping the Greeks to succeed. The Greeks kept Chaos at bay by Doing Things Right and the gods clearly approved.
Renaissance Europe and reviving Greek texts
A discontinuity in the transfer of knowledge happened around 600 CE. Firstly, hard-line Christian rule in Byzantium meant owning or reading ancient philosophical texts, written either by pagans or the wrong type of Christian, was heresy. Heresy was a capital offence. many philosophers fled with suitcases stuffed with their libraries, into the tolerant Islamic Caliphate centred on Baghdad.
Here, learning from all areas was valued and copied repeatedly. We only know about many ancient works because of Arabic copies.
It took a long time for Christian leaders to allow dialogue with the Islamic world, but by the 1500s this was happening in abundance. This time became known as the Renaissance - the re-birth of ancient styles, stories and writing in western Europe.
One of the stories that was of interest to rulers was the notion of Europe, and its innately superior people.
This idea would cause a lot of trouble across the globe.