The Indus Valley Civilisation - often shortened to 'IVC'
Here are the notes from session 4
The Harappa website, originated by Jonathan Mark Kenoyer.
This is an extensive resource and is worth dipping into repeatedly. It has contributions from many academics and details of all sites and artefacts.
Following requests about global language families, here is a list of the main language families in the world:
en.wikipedia.org/wiki/List_of_language_families#Major_language_families 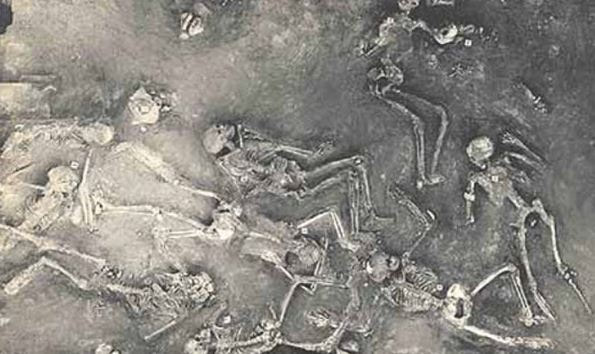 Session 5: questions arose about the 'mass grave', 'serial killer's dump site', or whatever we might call the series of ancient unknown events that resulted in some 14 people being dumped, either dead or dying, in a room in Mohenjo-Daro.
This site puzzles everyone, as the deceased do not appear to have been back-filled or buried. They were not killed in a building collapse, say in an earthquake, as there was no rubble among the skeletons.
Following requests I have been back through John Marshall's 1931 volume 2, and have also found a more recent analysis and comment by Vreena Mushraf-Tripathy ('Aryan Invasion' section of this document)
The experts of 1931 used terminology that is not acceptable in the present day, to classify the skeletons racially. For example, comparisons are made to the typical (apparently) cranial measurements of 'a Polish Jew'. There are detailed line drawings of some of the skulls, with descriptions of overall height of individuals based on long bone measurements.

Re-analysis of the Mohenjo-Daro 'dead room' skeletons began in the 19080s, and it was quickly established that no signs of physical trauma could be seen on the bones. Please note that this does not rule out their having been deliberately killed.....strangling, poisoning or suffocation will leave no trace on remains after a long period of time in acidic soil. But if these folk were killed and dumped, it happened individually, as it looks like the bodies were chucked into the 'dead room' at different time periods. Even in the 1920s, it was noted that one of the first skeletons uncovered was ...ermm...'quite recent' in date.