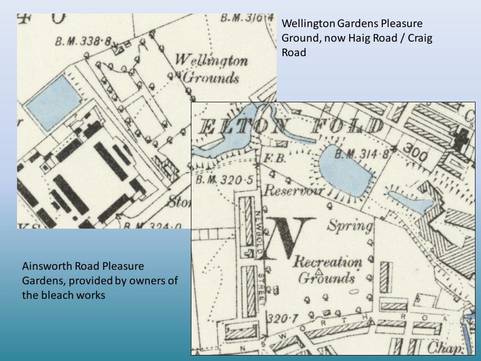 The more you peer into old Ordnance Survey maps, the more you start to spot the pre-municipal 'Pleasure Gardens' that sprouted as the factories grew.
The picture of industrialisation is often one of unremitting misery but there were good times too. These gardens stand testament to those good times.
Usually within walking distance, sometimes a jaunty canal-cruise away, they provided pretty, semi-rural settings for dancing, courting, and relaxation.

They are largely lost to history - but a bit of sleuthing can reclaim a few.
Around Bury: Victoria Gardens at Buckley Wells; Wellington Gardens; Ainsworth Gardens; Chesham Gardens. There will be more - go seek!
Salford's opening of Peel Park was the Big Example to all surrounding town councils. Rivalry set in, combined with local benefaction (is there such a word?) Bury didn't get a council until 1876 but it notable that strong movements towards open spaces were already underway. After incorporation, the town became surrounded by it's still-familiar parks along all the major roads. The map of today is still dominated by the Victorian and Edwardian parks.
I was however struck unusually dumb by the discovery of Bury's inter-war Lido at Walmersley... 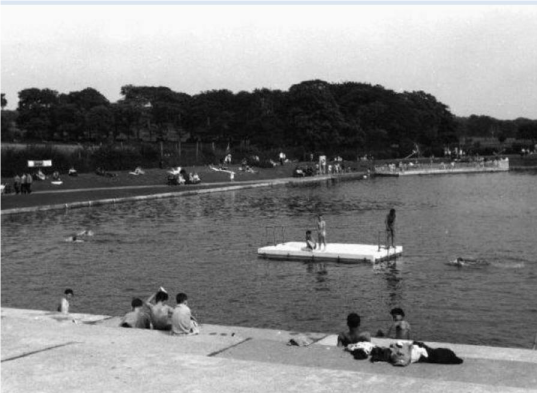 Thanks to Pat Papertown's website for this image
Pat Papertown's opinions are often quite at variance with my own, but the site holds some useful archival photos for which much thanks.

The weather must have been much warmer in Bury back then.