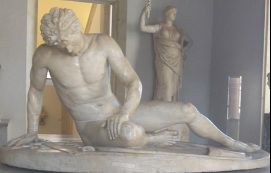 By the time that Roman writers began creating accounts of the Celts they were also annihilating or 'Romanising' them.
The evidence shows that by the time they encountered the Roman armies, Celtic societies had complex laws and belief systems, towns and roads existed, and that while they could be aggressive, Celtic tribes had a strong tradition of negotiating settlements with their enemies rather than resorting to destructive warfare.

Sounds civilised to me. The Celts had even taken the first baby steps to creating a written record of their own, issuing inscribed coins.
Sadly this culture was prevented from developing further at this point by the Roman advance. And that's another story altogether.
Here are some useful links for topics covered this session:

The discovery of Lindow Man and its links with a modern criminal conviction:
http://mg.co.za/article/1998-04-09-unearthing-the-living-dead

Join in the process of building up a database of hillforts:
http://www.arch.ox.ac.uk/hillforts-atlas.html