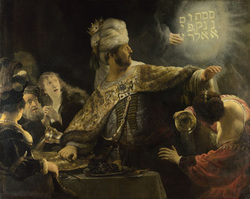 As the trade routes across the Middle East expanded it became increasingly the focus for conflict.
As I write this I can't help feeling a) here is a lesson for our times and b) how little we as humans appear to have learned from what happened in the past....
But this is not the time for philosophy.

Studying this portion of Middle Eastern history can get a bit overwhelming as there is a plethora of historical information.
In addition there is a complication, namely that Judaism, Christianity and Islam all have an interest in how this history is presented and interpreted. And please bear in mind the numerous sects of each of those three faiths, and how each will have unique interpretations....
So I've tried to create a digestible timeline.

Babylon
1900 - 1600 BCE: Babylonian Empire. Notable rulers include Hammurabi.
1500 - 1200: Social upheaval with numerous populations on the move. This is a turning point for many extant cultures in the Mediterrananean and Middle East. Eruptions of Thera / Santorini and Hekla may have contributed to climate events.
Assyria
1300 BCE: the Assyrians, a northern tribe of Mesopotamia, briefly conquer a huge swathe of the Fertile Crescent but this does not last long
Other nomadic tribes such as the Arameans and the Chaldeans become settled in Mesopotamia with their own territories.
900 BC onward: the Assyrians begin a concerted strategy of scaring the living daylights out of their neighbours and accumulate ever more land and control. Their fearsome reputation, backed by repeated success in war, ensures success.
700 - 600 BCE: The Assyrian Empire includes all of the Fertile Crescent and, briefly, Egypt. The core of the empire is northern Iraq near present-day Mosul. They begin accumulating libraries and are have a sense of the antiquity of 'their' culture.
Babylon
600-500: Babylon is the leading state in the area. The Ishtar Gate and other magnificent structures date from this period. Acutely aware of the area's ancient past, the Babylonians continue to accumulate libraries and record star observations.
Persia (really should be Persia-Parthia-Persia)
500: Nomadic Persians take control, probably aided by skill and speed as mounted fighters.
323-333 BCE: Alexander the Great uses similar shock and speed tactics to take control of huge land area but this fragments on his death.
333-200: Seleucus, a general of Alexander's, assumes control of the former Persian territory (Seleucid Empire)
200 BCE - 200 CE: Parthians, another group of north-western mountain and steppe-based nomads, assume control of the former Persian territories. They are widely identified as Persians, so while it's worth knowing they're really Parthians, Persians will do nicely as a description, and they assume control again after the Parthians lose control of the area.