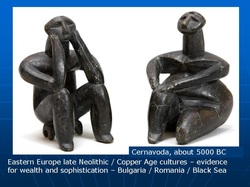 These just happen to be to places of contrast where the way evidence is preserved is as important as what went on in the distant past.
South east Europe: the parts of Ukraine, Bulgaria and Romania abutting the Black Sea and along the great rivers of the Danube and Dnieper. Hot dry summers and mild winters. These areas abound in 'tell' mounds, the remains of mud-brick setttlements rebuilt generation on generation. The mudbrick tells and the drier climate has aided material preservation. In addition, these were centres of population in the Neolithic Period. So lots of stuff remains behind.
Article on Figurines of Old Europe by Douglass Bailey 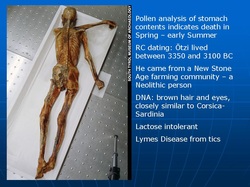 The discovery of Oetzi the Ice Man provides the world with a fantastic example of a man who was alive at the time that the Boyne Passage Graves were being built.http://www.iceman.it/en
The museum at Bolzano / Bozen is dedicted completely to the preservation, research and interpretation of the Ice man and his life. http://www.bolzano-bozen.it/en/ 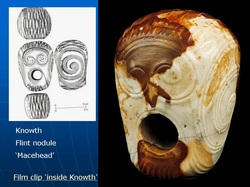 Ireland: maybe slightly warmer in 4000 BC but still a moist cool climate with chilly winters. Moist rich humus, an abundance of building in timber and 'cob' ie earth - most of the Neolithic evidence from here has been ploughed back into the earth millennia ago. Nonetheless the Boyne Passage Graves provide a tantalising insight into the potential sophistication of Neolithic society in North West Europe - on the geographical fringes maybe, but on the cultural fringes, probably not.