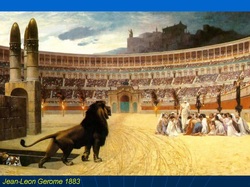 Very strangely and unexpectedly, the religion of the poor and the outcast became a leading political force in the 300s AD and has remained so since then.

When Christianity was adopted by the Emperor Constantine it was already being toyed with by the better-off Roman citizens, as one of the many mysterious eastern cults that so fascinated them. Ultimately, the worship of other gods was banned in the eastern Roman Empire in the 500s AD.

Over the same period of time, the 300s to the 500s, Christians redefined themselves as worshipping correctly - 'following orthodox teachings' - or being heretics. Sadly since then many thousands of Christians have been killed by fellow believers, for heresy. And equally sadly, a similar tale can be told of all current world religions.