The discovery of metal 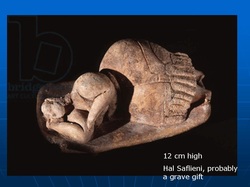 Like farming, metallurgy appears to have first been discovered in the region of southern Anatolia / northern Iraq.
And like farming, this region got a head start with the new technology well before it spread across the Mediterranean or along the Danube into Europe.

The first metals to be used were 'native' copper and gold - nuggets of metal ready to be hammered and pounded into shape. It's suggested that the colourful copper ores such as malachite and azurite were first sought out and ground up because they were valued as pigments rather than potential sources of metal, but metal smelting began to spread after 4000 BCE

By 3000 BCE a better alloy of copper had been discovered, bronze. This is made by adding tin to copper - tin being a very rare metal. The quest was on for sources of tin ore.
Rich finds from the Varna Culture of the Balkans show massive use of gold for adornment.
Some remarkable evidence for the social changes at this time come from Malta and from Los Millares in southern Spain. At both of these sites greatly increased wealth seems to have arrived with the use of metal and huge buildings were constructed to serve the needs of the inhabitants. The implication is that some kind of trade, exchange or communication over wider areas was taking place.