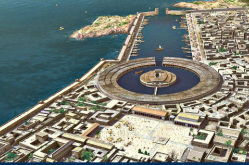 The trade networks created by the Phoenicians, and their means of encoding their transactions - their alphabet - have made an important contribution to European history. And yet the Phoenicians are probably the most invisible of the ancient people of the Mediterranean.

They didn't call themselves 'Phoenicians'. They didn't create a country called 'Phoenicia'. And wherever they migrated they seemed adept at blending in with the locals.

This link has the complete text of 'The Periplus of the Erythraean Sea, a guide to the routes and ports around the Red Sea and the Indian Ocean http://www.fordham.edu/halsall/ancient/periplus.asp

The author is unknown, but it seems to be a first hand description by someone familiar with the area. This supports suggestions that it was originally a Phoenician work, a body of knowledge that was initially passed on orally. It shows that by the turn of the common era, and possibly for some time before that, the ancient Mediterranean world knew about the lands around the Indian Ocean.