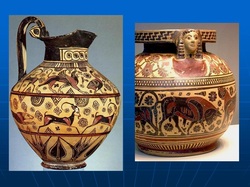 You'll never go short on information about ancient Greece. Quite the opposite - the danger is that the vast welter of information becomes daunting and puts you off.
The thing is that this ancient culture was enormously wealthy and by the time it reached its peak it was leading fashion, learning and military strategy all across the Mediterranean and beyond.
A literate and rich society, ancient Greek texts and epigraphy (words carved on statues and tombstones etc) is found everywhere, and formed the basis of every Roman's, then every western gentleman's, education right up to modern times.
I'm trying to concentrate on the archaeology - the physical evidence - without getting waylaid into dissecting historical texts.
History gets written by the winners. Archaeology is more objective.