The Natufians and Göbekli Tepe 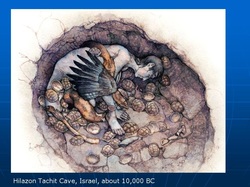 This carefully constructed grave was made around 13,000 years ago in a cliff shelter at Hilazon Tachit in Israel.
The area at the time was wooded and well-watered, as was much of the arc of land from the Levant to southern Anatolia to Iraq.
This is the area shared by the ancestors of all the key food plants and farm animals that have underpinned western civilisation.

The people that buried the Shaman-lady were living in small villages, hunting and foraging for food. However they were gathering high-carb grass grains in large quantities - the ancestors of wheat and barley.
Their way of life was ended, possibly by a major drought, so they didn't become the first farmers.

Around the time that the Natufian 'experiment' ended, another development started, this time in southern Turkey around Urfa. At Göbekli Tepe  evidence has emerged since the 1990s showing complex, carved stone structures pre-dating anything similar. They are currently interpreted as open-air temples.


It used to be thought that organised religion emerged when humans lived a settled way of life and built villages.The implication seems to be that these structures at Göbekli Tepe  provided the first impetus towards the social changes that led to farming and a settled (sedentary) way of life.

Finally, Atlit Yam  is a submerged site off the Israeli coast where evidence for an early farming community has been sealed by waterlogged sediments. This fishing community left behind evidence of its nets and catches of fish. Crops grown included grapes and wheat. Some kind of shrine of standing stones surrounded their freshwater spring, and forensic analysis of skeletons has revealed the earliest example of human TB as well as a suggestion that deep-water diving left some men hearing-impaired.