#1   By the time of its collapse, the Roman Empire was a Christian state. The administration of Christianity was embedded into matters of state. All government employees were Christian.
#2   Theft, piracy and slave-trading were a way of life around all coastal areas. Villages tended not to develop in pretty seaside locations for this reason, but inland somewhat, round a bend in the river.  This continued to be the case right into the 1600s in mainland Britain.
Being captured as a slave and sold into pagan Ireland figures in the main accounts of the life of St Patrick. All the accounts agree on his being born into urban, Christian, privileged society, although they disagree on quite where. we can't even be exact about time, but somewhere in the 300s CE is good enough.

St. Patrick's conversion of Ireland to Christianity had far-reaching consequences. His successors in the following few hundred years spread literacy alongside Christianity to Europe north of the Alps. Many towns still have a building known as a 'Schottenkloster' (Scottish monastery). They were men of terrifying personal charisma and austerity, rejecting even their personal identities and adopting anonymised names live 'Dove' (Colum, Colmba, Columcille).

They walked and sailed vast distances, converting, preaching and founding monasteries. In the early 600s Brother Little Dove (or White Dove, Columbanus) died at Bobbio monastery in northern Italy.
Click on the map of Celtic monasteries to go to an interactive version 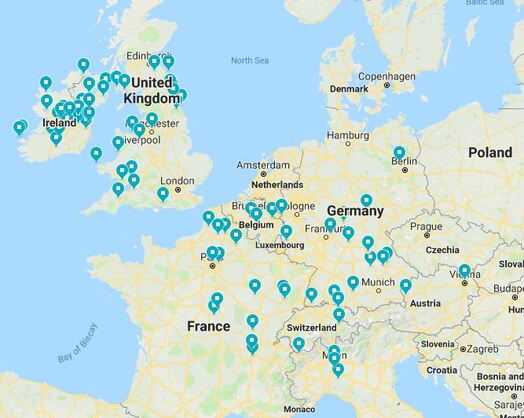 Known monasteries before mid-600s, Britain and Europe
The oldest manuscript in Ireland dates to this time. Known as the Cathac of St Columba, it shows the beginnings of artistic techniques that would flourish over the following 200 years across the Christian north. Look at how the capital letter is starting to be the dominant feature, and how the text bends round it, rather than the decoration being a mere space filler. 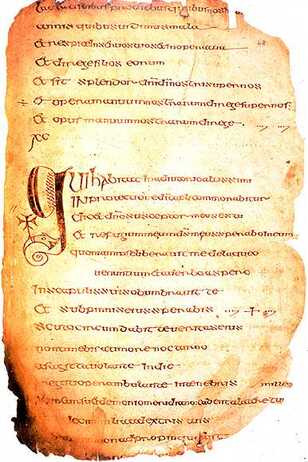 The cathac of St Columba
The Celtic Church eventually lost sway to the Rome-centred Christian church. This led to a church hierarchy who were aligned to 'temporal' power, and who courted and were courted by the powerful kings of Mercia, Wessex, and Northumbria. The wealth of these kingdoms was lavished on new religious buildings, beautifully painted Gospel books and richly adorned liturgical vessels.
The Celtic church didn't go away, but the more powerful among the clan leaders of Ireland, Wales, Strathclyde and Scotland leaned towards the new ways of Rome. It is no coincidence that one of the first northern church treasures we know about, the St. Ninian's Isle Treasure, post-dates 664.
Slides from this session
More information
British Library brief article on the development of painted gospel books  www.bl.uk/medieval-english-french-manuscripts/articles/english-manuscript-illumination