Palaeolithic hunters and the end of the Ice Age 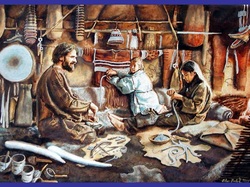 Reconstruction of Sunghir, Russia
Climate change has played an important part in the shaping of human activity. Over the last 30,000 years Europe's climate and plant life has swung from rich deciduous forests, to open grassland and frozen ice wastes and back again, several times. At the height of the last glaciation sea levels were lower, presenting routes along which people, and the animals they hunted, could move.

Evidence from the Palaeolithic Period is fragmentary but shows that even at these early times people were creative and fascinated by personal adornment.
Some of the objects surviving from palaeolithic times can't be explained, and must surely indicate a range of beliefs that we can only guess at. Parallels with hunter-gatherer societies in modern times suggest that Palaeolithic people believed in magic, spirits, a life after death and shamanism.

Dons Maps - useful website for information on prehistory around the world

What happened to the Neanderthalers? Article by Karen Harvati