I came across this really good map of modern Iraq today:http://www.un.org/Depts/Cartographic/map/profile/iraq.pdf
What's useful about it is that you can enlarge it to a great extent and it stays clear. You'll find lots of place-names that are in the news at present for sad reasons. But to locate some of the most ancient city sites in Mesopotamia, find Al-Nasiriyah, and look to the west.
Ur and Uruk lie about 10 miles west of Al-Nasiriyah. 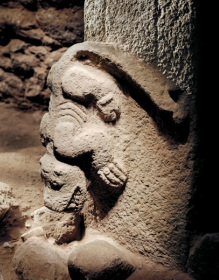 Last week we looked briefly at the very early 'town' site of Catalhoyuk. This session included the site of Göbekli Tepe in south-east Turkey.
Göbekli Tepe's discovery has challenged earlier theories about how humans developed agriculture.
Prior to the survey and excavations that have been ongoing since the late 1990s, it was assumed that populations learned to co-operate and work together en masse as a result of successful farming. The surpluses provided from farming allowed population density to rise, and provided an impetus to trade and exchange. This in turn led to greater prosperity and so people would then have started to build larger structures such as temples, administrative buildings, palaces etc.

But Göbekli Tepe seems to represent a huge, carefully-constructed religious site created by a hunter-gatherer population who did not live in settlements. Moreover the date of construction, c. 9000 BC, is much earlier than any comparative site.
The site seems to have been used for periodic barbecues of wild animal meat, on a very large scale. Dig director Klaus Schmidt suggests that the practice of herding animals together for the ritual feasts that occurred here led to the first genetic mutations from wild to domesticated animals.
In other words, organised religion caused agriculture - the exact opposite of previous theories of development.


Doubtless future years of excavation will bring more exciting discoveries from this area. Already, surveys are suggesting more similar sites in the wider area around Urfa.
Worth reading if you want to know more in depth: Göbekli Tepe, a stone age sanctuary in south-eastern Anatolia, Klaus Schmidt, pubished by Archaenova 2012, ISBN 978-3-944178-00-4


Excellent 2010 summary by Klaus Schmidt, 18 pages with excellent photos and some interesting discussion of the latest finds: http://arheologija.ff.uni-lj.si/documenta/authors37/37_21.pdf


Shorter summaries of the site's history and importance:
https://en.wikipedia.org/wiki/G%C3%B6bekli_Tepe
http://www.smithsonianmag.com/history-archaeology/gobekli-tepe.html 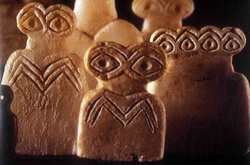 We looked at the site of Tell Brak, a Syrian site close to the border with Iraq. Excavated by Max Mallowan in the 1930s, it was the location of the intriguing 'Eye Temple', where hundreds of these enigmatic statuettes (left) were built into the fabric of a large mudbrick building.

In the same building Mallowan found the 'altar frieze' made of beaten gold and carved stone.

Jericho: a walled settlement by 6000 BC 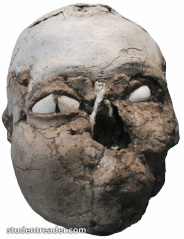 Excavation revealed that plastered and pained human heads were placed inside many houses at Jericho, and this prompted discussion in the session regarding the significance of such a practice. Relatives? enemies?