Colonisation and conflict with the spread of agriculture 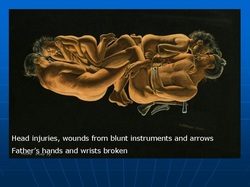 The shift to a settled way of life dependent on agriculture is probably the biggest change humans ever went through. In Europe its far from clear how this happened, whether through large scale population migrations or a more piecemeal transfer of ideas.
Although the evidence is patchy is seems to point to give us a number of occasions when events illuminate the darker side of human nature. Massacres occurred in some places, with deliberate desecration of the 'losers'
In other places family groups were carefully buried after suffering very violent deaths.
Our class made an interesting suggestion here - how can we tell whether ritualised warfare went on? The evidence may point to this.