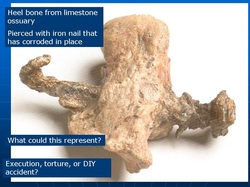 heelbone + iron nail
To an archaeologist it seems odd that a couple of decades of human argy-bargy in one corner of the Levant has had such a massive outcome.
Joshua Ben-Joseph, or Jesus of Nazareth, is believed to have set off a proper slow-burning, long-lasting revolution some time around 33 AD, and ended up executed as a criminal Roman-fashion ie crucified.
The intent of Christianity, like the intent of many faiths, is totally praiseworthy. The evidence for miracles is however another thing, and as an archaeologist I have to 'put my hands into the wounds' so to speak.
The ultimate point for me to remember though is what I often tell classes: absence of evidence is not evidence of absence.
Think on.