There are several phenomena that point to people being in contact across parts of Europe, even in the late Neolithic Period.
What date might that be? Well, it will vary according to where you look. It might be the 4000s BCE or it might be the 2000s BCE when a particular Neolithic community encountered its first metal.

Neolithic technology was based round stone, basketry, shell, wood. Somehow people in the Balkan and Black Sea area discovered quite early on how to smelt copper metal from its ores. But this remained a piece of luxurious magic, owned and used by few, and copper smelting spread only slowly across the rest of Europe.

Meanwhile along the same routes where we find big stone ('Megalithic') monuments, like dolmens, stone alignments, and vast stone and earth mounds, we also find intriguing artefacts. Take for example the necklace below, make of amber from the Baltic and variscite, a rock containing tin compounds, found in NW Spain: 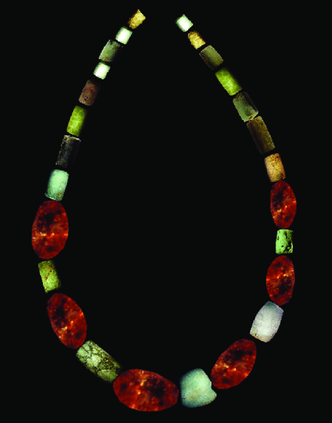 Another type of object found very widely are beautifully shaped and polished stone axe-heads, which have been found from the Mediterranean to Scotland

Museum of Scotland jade axe
Excellent page from the National Museums of Scotland explaining these wonderful objects:
www.nms.ac.uk/explore-our-collections/stories/scottish-history-and-archaeology/stone-age-jade-from-the-alps/
Slides from this session