As far as I can work out, nobody has yet done a dedicated piece of in-depth research about Bury's theatres and music-halls, let alone its moving picture houses. So here's another topic of real history sleuthing that YOU can get your teeth into!
Lots of sources mention that Bury had a theatre in the 1700s - we know this largely because it collapsed at one point. My guess is that this building stood somewhere in the area of what became the Derby Hotel, Town hall and Athenaeum. A huge swathe of Bury's town centre was cleared by Lord Derby for this grand project. So far I haven't located any maps that show the area pre-clearance. If they are to be found, I think it will be in the Stanley estate papers that reside in the Lancashire Archives in Preston.

The Athenaeum dominates all discussions of 'highbrow' entertainment. For me it also encapsulates what happened in towns across the north in the 1960s and 1970s. This grand 1850s theatre / library / lecture hall was hastily pulled down in 1971 by Bury Council, its owners, ahead of a suspicion that it would achieve listed building protection. Legislation to protect the built heritage caught on slowly in England as a whole but even slower in the industrial north. It's upsetting to see how much was lost in the race to modernise, and how little public consultation was involved. 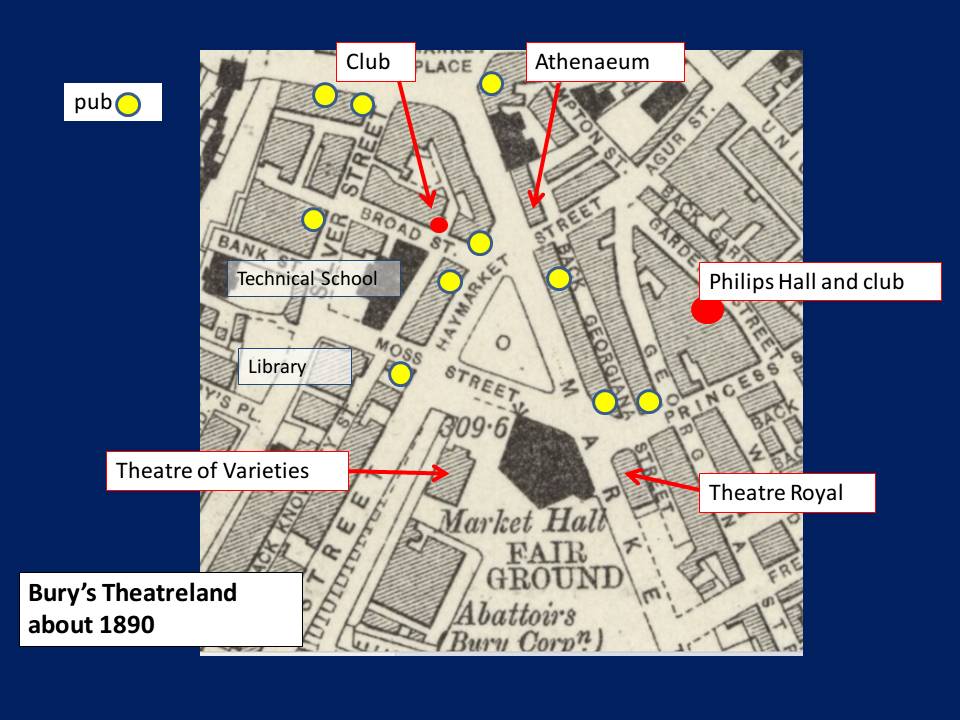 This rough map doesn't include singing pubs, and it's also clear that then as now this was a rapidly changing scene. So what I'm saying is, this isn't 'the definitive map' - what I'd recommend for the interested local historian is, get onto the local directories and have a go at mapping your own sites for concert halls, theatres etc.
For example: this map doesn't show the numerous halls rented or owned by Bury Cooperative Society. They provided a substantial programme of entertainment, both 'light' and 'improving'. It would be interesting to see how many local folk have an ancestor who met their beloved at a Co-op Dance. Doubtless the Co-op Archives in Manchester will contain as yet unseen riches about this aspect of Bury's past.

As well as the real directories in the local studies library, you can use some online from this link:
http://www.bury.gov.uk/undex.aspx?articleid=10880